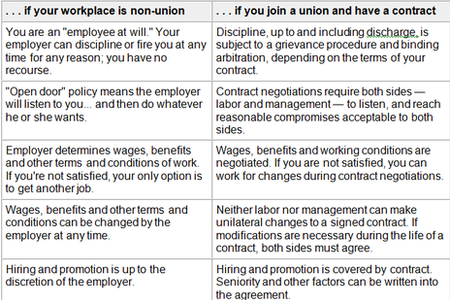 your rights are protected 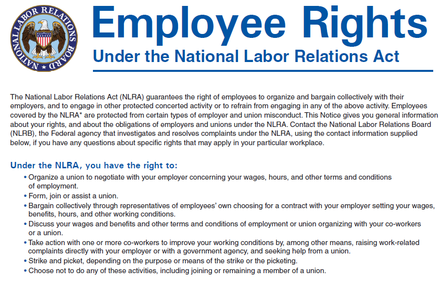 what your employer can't do

The National Labor Relations Act (NLRA) guarantees the right of employees to organize and bargain collectively with their employers, and to engage in other protected concerted activity or to refrain from engaging in any of the above activity. Employees covered by the NLRA* are protected from certain types of employer and union misconduct. This Notice gives you general information about your rights, and about the obligations of employers and unions under the NLRA. Contact the National Labor Relations Board (NLRB), the Federal agency that investigates and resolves complaints under the NLRA, using the contact information supplied below, if you have any questions about specific rights that may apply in your particular workplace.

Illegal conduct will not be permitted. If you believe your rights or the rights of others have been violated, you should contact the NLRB promptly to protect your rights, generally within six months of the unlawful activity. You may inquire about possible violations without your employer or anyone else being informed of the inquiry. Charges may be filed by any person and need not be filed by the employee directly affected by the violation. The NLRB may order an employer to rehire a worker fired in violation of the law and to pay lost wages and benefits, and may order an employer or union to cease violating the law. Employees should seek assistance from the nearest regional NLRB office, which can be found on the Agency’s Web site: http://www.nlrb.gov.

If you do not speak or understand English well, you may obtain a translation of this notice from the NLRB’s Web site or by calling the toll-free numbers listed above.

It is unlawful for Supervisors or Managers at your workplace to interfere with, restrain or coerce employees seeking to organize or join a Union. Any of the following acts constitute a violation of the federal law.

1.    Attend any union meetings, park across the street from the union hall to see which  employees enter the hall or engage in any undercover activity which would indicate that the employees are being kept under surveillance to determine who is and who is not participating in the union program.
2.   Tell employees that the Company will fire or punish them if they engage in union activity.
3.   Lay off or discharge any employee for union activity.
4.   Grant employees wage increases or special concessions in order to keep the union out.
5. Bar employee union representatives from soliciting employee memberships during non-working hours.
6.   Ask employees about confidential union matters, meetings, etc. (Some employees may, of their own accord, walk up and tell of such matters.  It is not unfair for the boss to listen, but he must not ask questions to obtain additional information.)
7. Ask employees what they think about the union or a union representative.
8.   Ask employees how they intend to vote.
9.  Threaten employees with economic reprisal for participating in union activities.  For example, threaten to move the plant or close the business, curtail operations, reduce employee benefits.
10.  Promise benefits to employees if they reject the union.
11.  Give financial support or other assistance to a union or to employees, regardless of whether or not they are supporting or opposing the union.
12.  Announce that they will not deal with a union.
13. Tell employees that the Company will fire or punish them if they engage in union activities.
14.  Ask employees whether or not they belong to a union or have signed up for a union.
15.  Ask an employee, during the interview when they are hiring him, about his affiliation with a labor organization.
16. Make anti-union statements or actions that might show their preference for a non-union man.
17.  Discriminate between union and non-union employees when assigning overtime work or desirable work.
18. Purposely team up non-union men and keep them apart from those they think may belong to the union.
19. Transfer workers on the basis of union affiliation or activity.
20. Choose men to be laid off on the basis of weakening the union's strength or discouraging membership in it.
21. Discriminate against union people when disciplining employees.
22. By the nature of the work assignment, indicate that they would like to get rid of an employee because of his union activity.
23. Discipline union employees for a particular action and permit non-union employees to go unpunished for the same action.
24. Deviate from Company policy for the purpose of getting rid of a union supporter.
25. Take actions that adversely affect an employee's job or any pay rate because of union activity.
26. Become involved in arguments that may lead to physical encounter with an employee over the union questions.
27. Threaten a union member through a third party.
28. Threaten workers or coerce them in an attempt to influence their vote.
29. Promise employees a reward or a future benefit if they decide "no union".
30. Tell employees overtime work (and premium pay) will be discontinued if plant is  unionized.
31. Say unionization will force company to lay off employees.
32.Say unionization will take away vacations, or other benefits and privileges enjoyed.
33. Promise employees promotions, raises or other benefits if they get out of the union or refrain from joining it.
34. Start a petition or circular against the union or encourage or take part in   circulating one, if it was started by employees.
35. Urge employees to try to induce others to oppose the union or keep out of it.
36. Visit the homes of employees to urge them to reject the union

The National Labor Relations Act (NLRA) gives most workers a legal right to build and participate in a union and to work together with other workers to speak up about workplace issues.

Workers have the right to:

The law also protects workers even when they are not building a union, like when workers talk together about working conditions and how to make things better. For example, if a group of workers signs a petition to their boss or goes together to the foreman to complain, that's protected activity.

The NLRA says:
Section 7: "Employees shall have the right to self-organization, to form, join, or assist labor organizations, to bargain collectively through representation of their own choosing, and to engage in other concerted activities for the purpose of collective bargaining . . . ."

Workers have legal protection when they:

Remember - you still have to follow the rules of your workplace. When you are standing up for your rights, be careful not to give your boss an excuse to fire you. You have some protection - but not if you break rules. Technically, you can't be held to different standards than other workers, but it's better to keep your actions completely above debate.

Section 8(a): "It shall be an unfair labor practice for an employer . . . to interfere with, restrain, or coerce employees in the exercise of the rights guaranteed in section 7. . . ."

That means that the Company is not supposed to:

Unfortunately, management often breaks these rules to try to keep workers from standing up for their rights. Keep notes (with witnesses, dates, times, and locations) of each time management breaks these rules. It may be important during your campaign or to protect workers who are threatened. You should report these acts, if committed, to your Union Organizer.

If your boss breaks the law by discriminating against you because of union activity, you have to show that: